Music Notation
It's Easier To Understand Notation Than You Think!

A few music notation basics will take the fear out of reading notation for many people.

Yes, it can and does get complex at the higher levels, but if you're just reading guitar music the basics of notation, signs and terms will get you a long way.

In fact, to help you on your way, you might want to look at these theory worksheets.

Learning the basics of music notation is not much harder than reading guitar tablature.

So where should you begin?

Good question! I'd say right at the start...

First of all I should mention the musical alphabet. It is exactly the same as the first seven letters of the English alphabet, namely: A, B, C, D, E, F, G, (then back to A).

This series of notes continues up and down the staff (which I'll explain below) in the same pattern of letters but denotes different pitches of the music note when it does.

Yes, there are sharps and flats, but I'll deal with these later.

Secondly, in music notation you use what's known as a "staff". A staff is a series of lines and spaces where a music note resides.

Additionally, the use of a "clef" sets the pitch of the notes that are on the staff and in guitar music we use the "G" or treble clef almost exclusively.

It is called the "G" clef because its tail wraps around the "G" line within the staff. Here is a graphic example of what I mean...

You can see from the lowest line of the staff that you start on an "E" note and end on an "F" note at the top.

The actual musical alphabet can be seen from the start of the second space. Yes,  that's right, the "A" note. Notice also the tail of the "G" clef as it wraps around the "G" line of the staff.

Now that you know about the staff and the clef I'll give you an example of the most common notes in music notation with both their American and British names.

I rather like the American way of naming musical notes as it makes much more sense than the old-fashioned way.

Here is an example of what I mean in music notation...

The comparative names in the old English notation system (from whole note to 128th note) are:

As you can see, this type of notation can become very unwieldy indeed!

Take a tip; stick with the American notation where possible.

Another basic piece of information you need when reading notation are time signatures.

Time signatures are mostly found at the beginning of the music and consist of two numbers (one vertically above the other), which indicate both the number of beats in a bar and the value or duration of each beat in the bar.

A bar line groups the beats into equal portions.

Bars are also known as "measures". A double bar line usually indicates the end of a section of music. Let's have a look at some "simple" time signatures in graphic form in notation...

These different musical notes have different lengths or duration. This is what gives rise to rhythm. Here is a graphic of the comparative lengths of each note above in the time signature of 4/4... 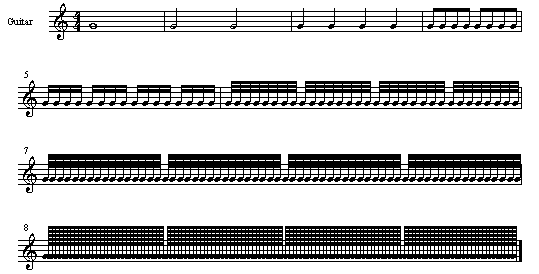 Then, the half note has the 2 counts per note, hence the term half note as all the notes are just divisions of the whole note. This is why the American music notation makes so much sense.

Also in music notation there is one small change to the musical note as you divide it up. For instance, if you look at the graphic above you see the whole note is just an ellipse. The half note is an ellipse with a stem.

A quarter note is an ellipse, with a stem and the elliptical part colored black.

The eighth note has all of the above with an added tail on the stem. From the eighth note to the 128th note it is just a simple matter of adding an extra tail to differentiate from the note that precedes it.

Obviously, the faster notes like the 32, 64th and 128th are not played in succession like in the graphic above. It wouldn't be sustainable in real life.

You see them in much smaller quantities such as "grace notes" and "ornamentation" (especially in classical music). So there's nothing to worry about here.

A little practice and anyone can manage to play these notes clearly and with precise execution.

Pitch means the difference in sound in terms of higher or lower notes. That is the height or depth of sound. The notes are placed on the staff according to the required pitch.

If you need to go higher or lower that the staff you use what is known as "ledger lines".,

These lines indicate in music notation pitch that is outside the normal range of the musical staff. Here is an example of "A" major scale over two octaves using the treble clef. I've also used guitar tablature so you can see the comparison...

The above graphic was an A Major scale.

Music Notation Sidebar - Did You Know?

The musical alphabet consists of sharps (#) and flats (b) as well as note names. This means that the actual number of notes in the alphabet is 12 rather than 7.

Some note names are "enharmonic", meaning they have two names for the same note e.g. G sharp can also be called A flat etc. Here is the full alphabet...

The last thing I want to talk about in the basics of music notation is "dots" and "rests".

A dot, when placed behind a note or rest in music notation increases the value or duration of that note by half.

For example, if you have a whole note (worth 4 beats in 4/4) that is "dotted" its value or duration will increase to 4+2=6 beats. The same applies for ALL other notes.

That is their duration or value is increased by half of the original note again.

In all music notation,  there is an equivalent rest.

They represent a period of silence but correspond in name and value to a music note. Here is a graphic of all the notes discussed above and their equivalent rests...

Notice how the whole note rest is 'hanging' from the middle line on the staff, and the half note rest 'sits' on it.

This is because they look exactly the same and only their position differentiates them. I hope you've got something from this lesson on music notation.

Good luck with your music playing AND reading in the future!

Join us by clicking on the Icons below...